Sharon Blackie’s Book, If Women Rose Rooted (2016), Inspired Me to Go to Ireland

This is partly a book review of a nonfiction book by Dr. Sharon Blackie, If Women Rose Rooted: The Journey to Authenticity and Belonging (September Publishing, 2016) and part of my own journey as an “eco-heroine,” a journey that took me to Ireland in June 2019. Dr. Blackie’s book inspired me to come into my own as an “eco-heroine.”

At the time I read Dr. Blackie’s book, I was studying the anthropological dimensions of environmental policy, with a strong focus on the intertidal zone, and oceanography, at University of Maine as part of an Interdisciplinary PhD studies program. At the time, I was still getting my footing as a graduate student, having returned to pursue my degree after working in the fields of wetland science and policy for a number of years, and having reached a point where I knew I wanted to teach, write and contribute somehow to collaborative projects and initiatives involving water, wetlands, climate change–and human ecology. I was also coming to terms with the idea that I had lost a sense of my purpose (something that I don’t typically experience) and felt a little like an “Indiana Jones” / “Lara Croft” adventurer getting itchy feet, feeling my way through a quest I’d only vaguely glimpsed in a dream once, while studying human ecology at College of the Atlantic nearly two decades ago. Then, I read Blackie’s book. I cannot explain it except to say that after reading her book, I wanted to live it. Or, come as close as I could possibly get to experiencing what Dr. Blackie described so that I, too, could feel that sense of “belonging” to the land. I grew up on the coast of Maine and have always felt close to nature. That really wasn’t my struggle (being close with nature). But, I felt a little lost in my graduate study program, and somehow, this book helped me figure out how to re-calibrate my inner compass a bit better, to get a sense of direction.

Become a haunter of edges: sea-swept tide pools of islands, the dark mysterious peat and depths of blanket bogs, the fertile wetlands of the “buried feminine” drench the natural and cultural landscape of Sharon Blackie’s book, If Women Rose Rooted: The Journey to Authenticity and Belonging (September Publishing, 2016). Students, readers, poets, human ecologists, nature-lovers, wetland ecology scientists and/or wetland professionals, as well as those interested in Celtic mythology, political ecology, eco-feminism, human ecology, environmental psychology and cultural anthropology—with a special interest in place-attachment, will respect the multidisciplinary, multi-species, and holistic suite of stories and case-studies covered in this book.

A 2016 Nautilus Book Award winner in the genre of “Environmental Feminism,” Dr. Blackie’s If Women Rose Rooted is a call to action. By the end of the book, it is difficult for any ecologically-conscientious reader not to identify with the journey of Blackie’s “Eco-Heroine.” The journey begins in the “Wasteland,” an internal and external manifestation of the planet in environmental crisis—climate change, fracking, the destructive effects of Alberta “tar sands” on the boreal forests, along with many deeply personal examples of women activists who found themselves at a point of personal or professional crisis—and realized they needed to make a dramatic change (or leap of faith) to return to their roots, to community, to gain a sense of place. Place-attachment evolves into an intense identification with the land, water and wetlands—with a special focus on the Celtic countries of Ireland and Scotland. The “Eco-Heroine’s Journey” delves into the cultural anthropology, sociology, psychology, Celtic mythology and ecology of the natural and cultural landscape of Ireland and Scotland—with some fascinating, liminal forays into the Celtic Otherworld through stories of myth and the Celtic Fairy Faith. Dr. Blackie invites the reader to entertain a new philosophy of eco-feminism, to put aside the patriarchal “hero’s journey,” or “quest,” and instead, to embrace a new path. The reader will be introduced to numerous real-life “eco-heroine” leaders, activists, policy-makers, crofters living “off the grid” while also advocating for forestry policy, medical professionals who have adopted new ways of healing and treating patients in remote, nature-inspired retreats, lawyers who proposed an “Ecocide” law to the United Nations (2010) and sparked a new interest in restorative justice.

Four components of the book anchor the “Eco-Heroine’s Journey.” The first component is comprised of stories from the Celtic Otherworld. Stories of selkies, Celtic fairy women, the well-maidens of ancient Ireland, the “mad women” who lived in the wild—these stories serve as metaphors, historic precedent and a prompting to rethink the dualistic argument between two groups of eco-feminists: there are those who advocate for equality to the point where they want to embark on the masculine/patriarchal “Hero’s Journey” (likened to those of the chivalric Arthurian Knights of the Round Table), and in modern society, these women strive to accomplish equal or better jobs as their male counterparts. Blackie proposes an alternative to that dualistic stance, and instead suggests that the Eco-Heroine’s Journey is completely different—not better, not equal to, not lesser than—that of the Hero’s Journey.  Blackie plunges the reader into the Celtic Otherworld, and with poetic and skillful precision, then interweaves an ethnography of environmental advocacy among women, who Blackie interviewed. These women exemplify the qualities and actions of the “eco-heroine,” often marked by unusual, charismatic and fearless quests for some area of environmental policy, or an authentic way of living closely with the land—and their way of showing others a new way of living, healing, being. Put simply, I loved this book. This book became a touchtone for me as a graduate student, as a writer, as a human ecologist. I realized, thanks to this book, I, too, am on the eco-heroine’s journey. Perhaps you are, as well. After reading her book, I joined the International Society for the Study of Religion, Nature and Culture, and I registered to attend their annual conference, which was held at UCC in Cork, Ireland in June 2019. There, I attended a seminar talk on selkies by poet, artist and archaeologist Erin Kavanagh, who opened my eyes to the intertidal nature of selkie mythology. Since I’d just read about selkies in Dr. Blackie’s book, I was even more “in tune” to Kavanagh’s poetic discussion of selkies at the conference on water, climate change and spirituality at UCC in Cork. After I attended the conference, I rented a car, and traveled around southwest Ireland, and swam in the ocean in a strong current. I’m certainly no selkie; I nonetheless felt transformed and awakened in a spiritual way. 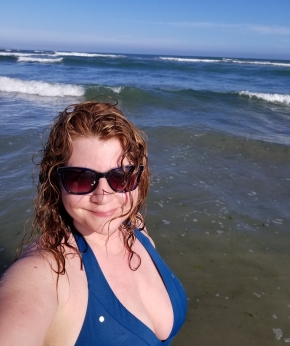 After my swim in the Wild Atlantic, Co. Cork, Ireland, June 2019

Blackie’s observations, first-person narrative and perceptions of the “eco-heroine’s journey” make up the third component of the book, and some readers may appreciate her distinctively poetic voice. Blackie is a poet, as well as a psychologist with a background in neuroscience, and special expertise in Celtic mythology. This multidisciplinary background lends itself to an interesting exploration of woman as a shaper of the land, as a part of the natural landscape—inextricably linked to “Mother Earth” through the “Fertile Fields of the Buried Feminine.” Ultimately, Blackie proposes while the quintessential quest for the “holy grail,” which one could argue has long been considered a destination for the “hero,” can be transformed to reveal the quest for the eco-heroine: that the eco-heroine, herself, is the vessel, the holy grail. She, the “Eco-Heroine,” is the “voice of the wells,” the voice of Mother Earth, who possesses the power to lead in a different way. 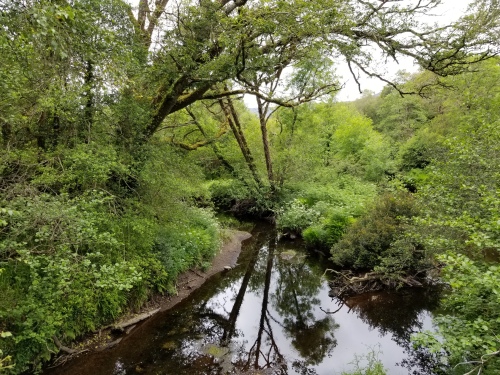 Blackie’s book chapter titles read (at least to me) like names and classifications of wetlands. Any wetland-lover would enjoy the rich, detailed wetland ecology–and the spiritually rich discussion of human connections with wetlands and submerged landscapes in her book. While in Ireland, I was very sick with an illness, but I made the most of my time there. I hiked around in Glengarriff Wood Nature Preserve in Co. Cork, attended a workshop on seaweed harvesting and the intertidal at Reen Pier, Unionhall (Co. Cork) and paddled a kayak in Lough Hyne, a rare saltwater lake (Co. Cork) at night.

I will post more of my adventures from Ireland in the near future.

To learn more about Sharon Blackie’s books, her work, her poetry, and the workshops she offers, I encourage you to visit her website here.

Find her book on Amazon here.