Healthy Waters Coalition – What’s on Our Minds, In Our Hearts

At my Healthy Waters Coalition meeting tonight, where we discussed the value of accurate, balanced information about oil spill prevention, I accidentally spilled pink lemonade across the agenda.  (From now on, the incident will be remembered as the “pink spill,” and it can be added to a long list of funny things I have done while leading coalition meetings.) I began to think about what’s really motivating our efforts to inform and educate Sebago Lakes Region citizens and local businesses about watershed issues.

We are a water-based economy here in this part of southern Maine. Boat rentals and recreation-based businesses, real estate and restaurants, florists and landscaping contractors, summer camps for children and accommodations (think: Inn by the Pond), not to mention waterfront property in towns–and property taxes paid to Towns–all bring in millions of dollars in annual revenue for the Sebago Lakes Region. The State of Maine tracks the annual revenue for freshwater fishing and accommodations for several Lakes Region towns. Wetlands are valued for their ecological services, too, and that translates to dollars. Real dollars. Wetlands attenuate flooding and aid in filtering waters to provide good water quality in our groundwater, which produces the drinking water for those who have private wells.  All of the headwater streams (94-100% of streams) in the region are located in Source Water Protection Areas (SPAs), meaning that they directly feed into a public drinking water system. In our region, that system is Sebago Lake, which is so clean, it’s exempt from the federal filtration requirement, an expensive option if ever it were to become necessary for the Portland Water District to put in place.

I want to reach out to other groups engaged in an open dialogue about the possible transportation of oil sands through New England and the importance of protecting our local watersheds, local economy–as the two are interconnected.  While the HWC already has members in 8 Lakes Region towns, representatives from local government boards and committees, watershed organizations, local businesses and other interests, such as Saint Joseph’s College, and we have partnered with some fantastic environmental and conservation-oriented nonprofit organizations already, I’d like to connect the Healthy Waters Coalition with a broader network.  I’m interested in connecting with folks at ConservAmerica, town and city revitalization committees, regional Chambers of Commerce, and the business community. We have so much invested in our waters. While pondering this, I scribbled some thoughts and turned it into this info-graphic (below). I like how it came out. Let me know what you think. 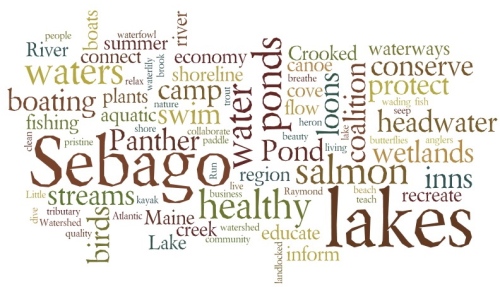 Down in a Hole

Walking along the road, I came upon a storm drain with the words: “DON’T DUMP FLOWS TO STREAM” with the silhouette of a rubber ducky over the phrase, “PROTECT YOUR WATER.” The signage was provided by Think Blue Maine, which is one of many networks throughout the country that has paired business savvy with ecological sense. http://www.thinkbluemaine.org/business/A number of automotive businesses in central Maine have come together to promote awareness about what goes down the storm drain—from transmission fluid to household pollutants. Auto services make a good role model for other industries because they handle motor oil and other auto fluids on a daily basis, which, if handled poorly, can contribute to stormwater pollution.

Storm drains are supposed to distribute surface run-off to streams, wetlands and other waters and in doing so, prevent flooding across roads.http://en.wikipedia.org/wiki/Surface_runoff Not all storm drains flow directly into streams; some drains go to sewer treatment plants. The problem occurs when people think that anything washed (or poured) down a storm drain will be treated at such a facility, whereas in reality, some cities re-direct the run-off to streams and rivers. Think of that the next time you go swimming in a local pond, river, lake or at the beach. Local waters receive the run-off from the storm drains, which often have more than stormwater passing through them.

Pollutants such as metals, toxic chemicals, viruses, oil and grease, solvents and nutrients, even human waste get spilled or dumped down the drains and then flow through the pipes out into rivers, streams and larger waters, like the Chesapeake Bay. The town of Ashland, Virginia created a campaign with a brochure about stormwater and how to prevent pollution from disappearing down the drain.http://www.town.ashland.va.us/vertical/Sites/%7B7CD2B061-2700-4C92-86AD-6137417373F1%7D/uploads/%7B501D4B01-CA55-4E4B-B5DB-E49C61C700F0%7D.PDF

The city of Boise, Idaho has a similar approach to making citizens aware of where the storm drains lead. A character named Eddy the Trout teaches the public about the importance of being responsible for clean waters locally. Watch Eddy the Trout’s TV commercial http://www.partnersforcleanwater.org/ that educates people about stormwater pollution. The city of Kearney, Nebraska has a handout with good illustrations of ways that people can reduce stormwater pollution in their local waterways:http://www.cityofkearney.org/documents/Public%20Works%20Dept/Stormwater%20Management/Storm%20Water%20Clean%20Water%20Protection%20Program.PDF

In some cities, engineers and industry professionals have developed catch basins and drain filters to prevent litter from going down the storm drains. Berms and barriers designed to slow the flow during storms and drain guards installed to prevent pieces of litter won’t prevent all of the pollution, but it’s a start. And it gets people thinking about other ways to prevent stormwater pollution. There are a number of products available to businesses that want to prevent pollutants from spilling down the drain.  Drain inserts look like a trash bag on the inside of the storm drain; inlet filters look like stuffed neck pillows that fit inside the drain and absorb the contaminants. Geotextile barriers slow down the rapidly moving run-off and allow the sediments to settle before spilling down the drain. The Soil & Water Conservation Districts of Southwest Ohio have analyzed storm drain inlet protection methods in a report with a rule of thumb, “if it doesn’t pond water, it doesn’t work.”http://www.hcswcd.org/services/ulm/docs/storm_drain_inlet_protection.pdf

When I was a girl scout, my grandmother sometimes led my troop on field trips into the woods and wetlands in midcoast Maine. She taught us how to make “sit-upons,” which consisted of a stack of newspapers inside a trash bag; the sit-upons kept our butts from getting wet when we sat (inevitably) on the wet ground to hear Gramma talk about the wonder of nature, and all about her experiences as a girl scout. But most of my scout troop’s patches concerned arts &amp; crafts and community service, not nature. I don’t recall ever earning a nature badge, although I spent most of my time outside, learning about wildlife and conservation, playing in creeks or building fairy houses in the roots of trees. My brother was a boy scout. I recall that he earned outdoorsy badges.

These New Hampshire boys earned their badges by building a bridge in wetlands:http://www.cabinet.com/merrimackjournal/merrimacknews/637153-308/five-scouts-earn-rank-of-eagle.html These Southwestern boy scouts worked on a river restoration project: http://www.southwestcoloradowetlands.org/Sample_Projects/Sample_
projects_main.html This boy completed an Eagle Scout project,

blazing a trail to provide public access to a wetland in Alabama:
trails_for_eagle_sco.html
In Iowa, local scouts teamed up to work on wetland projects:http://www.ag.iastate.edu/centers/iawetlands/
cases/Ftdodge.htmlhttp://blog.al.com/live/
2010/01/teen_cuts_

Since I was a girl scout, many new patches have been created. Girls can earn a Water Drop Patch by learning about watersheds, water quality and completing a related project.http://www.epa.gov/adopt/patch/