Save the Eels – New Book by Trout Illustrator, James Prosek

Growing up on a lake in Maine, my brother and I liked to lean over the end of the dock, shine a flashlight into the water on summer nights and lure the eels. They’d swim over to the beam, poke their heads out of the water and kiss the flashlight. I used to feel them slip passed my legs when I swam at night. They felt slippery because eels cover their bodies with a layer of mucous. But over the years, I’ve encountered fewer eels in the lake. Their population has decreased. In lakes and streams and rivers all over the world, eels are disappearing. 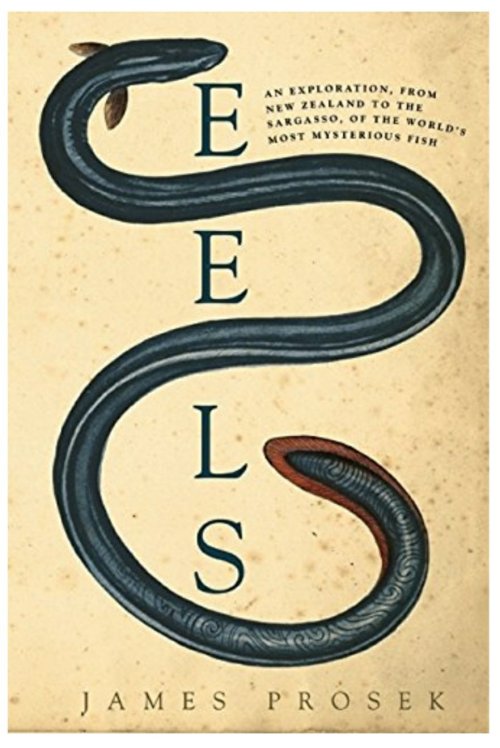 In the 1880s, the New York Times claimed that the eels in the St. Lawrence River were abundant; the population could never be diminished. Freshwater eels are the only fish that spends its adult life in freshwater and then returns to oceans—namely the dark Sargasso Sea, to spawn and then die. Juvenile (elver) eels travel up streams and tributaries of the Mississippi River and migrate into other freshwaters—lakes, wetlands, ponds—where they live until they reach maturity. For some eels, this can take many years, even 100 years. Once they reach reproductive maturity, they migrate back down the streams and rivers to the ocean, back to the Sargasso Sea, to spawn. They don’t come back. This is because eels go into their silver stage of development and their whole system degenerates. Their reproduction cycle has a “will self-destruct” button after they spawn. Unfortunately, nowadays eels are increasingly threatened by destruction of habitat caused by coastal development and construction of dams as well as overfishing. In the last 20 years, the population has been diminished by possibly as much as 99%. (FWS)

FWS released a status review of the American eel in 2007 which showed that while the eel population has decreased in some areas, the overall world population was not endangered. The eel was not added to the Endangered Species list. “Overfishing and hydropower turbines continue to impact eels in some regions, such as Lake Ontario and Chesapeake Bay, although these factors do not fully explain the reduced number of eels migrating up the Saint Lawrence Seaway and into Lake Ontario,” explained FWS biologist Heather Bell on the 2007 report.http://www.greenenvironmentnews.com/Environment/Wildlife/Endangered+Species+
Act+Protection+for+American+Eel+Not+Needed For more information on the American eel and the FWS research on considering it for protection, go to:http://www.fws.gov/northeast/newsroom/eels.html FWS mapped a model of eel habitat in 2001:http://www.fws.gov/r5gomp/gom/habitatstudy/metadata/American_eel_model.htm

Meanwhile, one man is calling for eel conservation. Check out this article by James Prosek, on Yale’s Environment 360 blog: “A Steady, Steep Decline for the Lowly, Uncharismatic Eel”http://e360.yale.edu/feature/a_steady_steep_decline_for_the_lowly_uncharismatic_
eel/2316/

Prosek’s new book is titled, Eels – An Exploration, From New Zealand to the Sargasso, of the World’s Most Amazing and Mysterious Fish. According to a New York Times review, Eels is more than a “fish book.” It is an “impassioned defense of nature itself, rescued from the tired rhetoric of 1970s-style environmentalism by good, honest shoe-leather reporting.” Prosek takes the reader to eel haunts around the world: a river in the Catskills of New York; the traditional Maori eeling grounds of New Zealand; and an odd little volcanic island…http://www.nytimes.com/2010/10/24/books/review/Greenberg-t.html Prosek previously won a Peabody Award in 2003 for his documentary about traveling through England in the footsteps of Izaak Walton, the 17th-century author of The Compleat Angler. Prosek’s watercolor paintings of fish first appeared in his book, Trout: an Illustrated History http://www.amazon.com/Trout-Illustrated-History-James-Prosek/dp/067944453X

In the U.S., most people have a general dislike for eels. But in other parts of the world, eels are treated with respect, having a place in ancient myths and sacred beliefs, for example, in New Zealand. Scotland just published its first eel conservation management plan in 2010. http://www.scotland.gov.uk/Topics/marine/Salmon-Trout-Coarse/eelsNorway passed new laws that assign fishing quotas, lowering the allowable number of eels caught starting in 2010. http://marinesciencetoday.com/2009/07/03/norway-helps-endangered-european-eels-conservation/ Scientists in England are also calling attention to the problem of eels vanishing from the Thames River.http://www.telegraph.co.uk/earth/environment/conservation/7046249/Eels-vanishing-from-River-Thames-scientists-warn.html

Also check out a related article in the Orion Magazine:http://www.orionmagazine.org/index.php/articles/article/5610

Additionally, check out the photos of “tame eels” eating crackers in this album:http://www.thewildernesslodge.org/biche_images.htm